A lot of ink has been used writing about the Federal Reserve over the last few years, so we thought it appropriate to end our last quarterly review writing about them some more.  Their first meeting of the quarter occurred in late October when they decided to lower rates for the third time in 2019 by 25 bps, highlighting their concerns about global growth, low inflation, and uncertain trade policy as the main rationale behind the decision. The main difference in this cut versus previous cuts is the expectation going forward.  During previous meetings this year, it appeared the Fed was looking for reasons not to cut, but going forward, the Fed’s statement appears to say that they will need valid reasons to cut again, raising the bar for future rate cut decisions.  This held true in their December meeting as the Fed held rates steady and stated they will continue to watch the economy.  The Fed Funds rate stands at 1.50 – 1.75 today, 75 bps lower from where it started the year.

Separately, while the Fed won’t state it publicly, the upcoming 2020 election is another reason they would prefer to not touch rates unless absolutely needed.  It is important for the Fed to remain independent and they don’t want to be seen as influencing the results of the election one way or another.

The notes from the Fed’s October meeting were insightful as it related to their view on negative interest rates, a newer phenomenon we have seen across other parts of the globe. Overall, the Fed stated “negative interest rates currently did not appear to be an attractive monetary policy tool in the United States” citing differences between our financial system and others, mixed results, and the potential for negative side effects as the main reasons why.

Investment predictions is a difficult game

Last December, we created a chart showing the predictions made by several major institutions for where they thought the S&P 500 would end 2018. 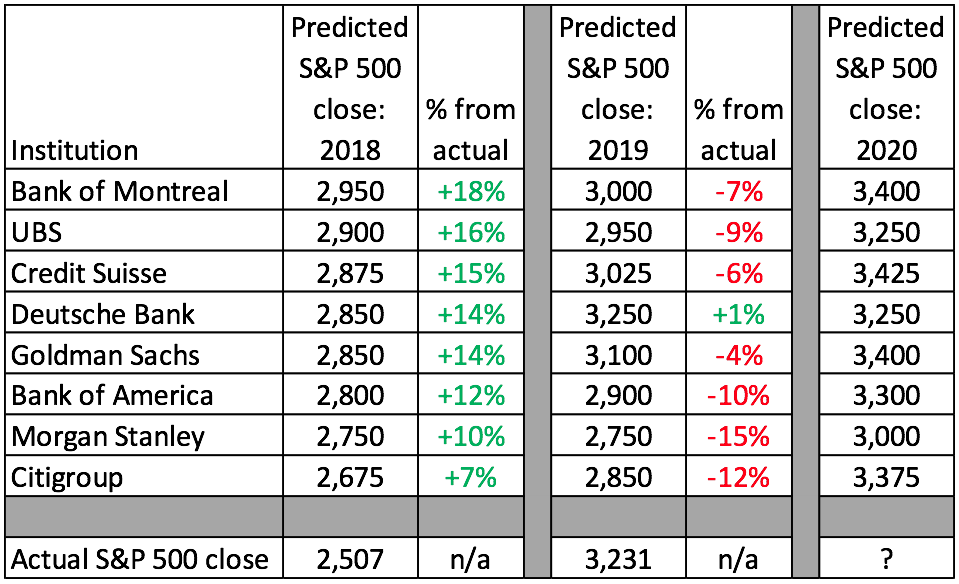 As the chart shows, most predictions shown were off by 10% or more with all of the predictions being much more optimistic than what occurred in 2018.

For 2019, we simply added to the chart with their updated predictions for 2019.  Not surprisingly, most predictions were pretty far off the mark again; however, this time most all were more pessimistic than what occurred in 2019.

For us, this highlights a few different thoughts.   First and foremost, while we know there are no guarantees when it comes to investing, we would argue against basing your investment strategy on predictions.  This aligns with the sage advice of Warren Buffett, who said “Forming macro opinions or listening to the macro or market predictions of others is a waste of time.” This is simply because there are too many unknowns and variables throughout the year that cause markets to react and change – things that are likely unknowable when the predictions are made.

Similarly, it highlights the risks of simply following one prediction over another.  For example, not to pick on any one institution, but let’s say that you followed Bank of Montreal and changed your asset allocation decisions based upon their prediction.  Compared to actual results, their predictions were high for 2018 and low for 2019; we can check back in a year to see if they were right or not for 2020.

Rather than making these predictions, we would instead suggest following a few fundamental investing concepts including: 1) holding a portfolio where the risks and returns align with your risk tolerance, 2) keeping investment costs low, 3) having a tax-efficient approach, 4) investing for the long term, understanding there will be ups and downs along the way.  We know there are more exciting ways to invest money; we just believe these concepts provide the best chances for success.

Finally, we would be remiss if we didn’t add the obvious joke that even in the year 2020, we don’t have perfect "20/20 vision" to predict the future. (ba dum tsss) 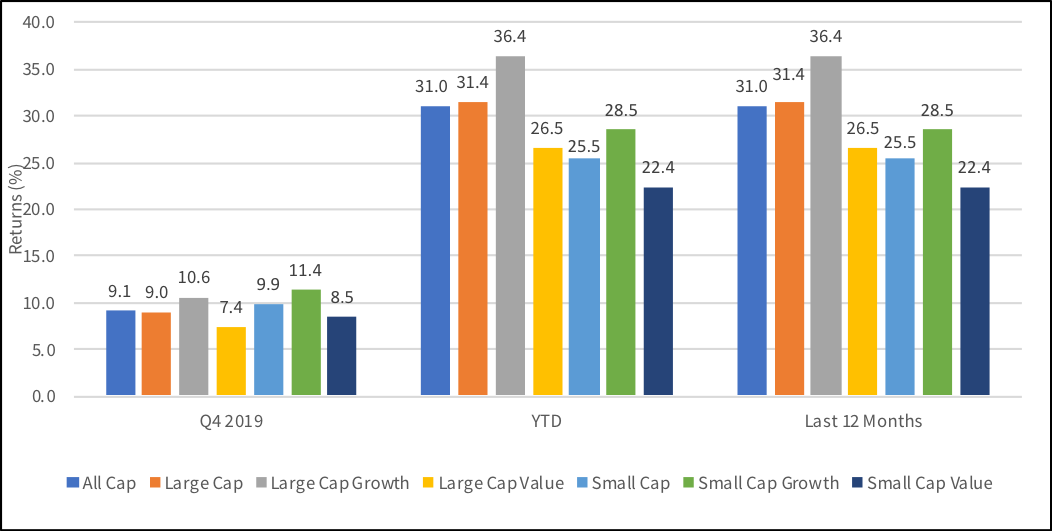 Source: Morningstar, Russell benchmarks shown, past performance is not indicative of future results

US equity markets continued to move higher during the fourth quarter.  Multiple indexes reached new highs on several occasions as talk of a recession seems to be on hold at this point.

From a market cap standpoint, large cap growth continued to outpace their small cap counterparts for the quarter and for the year.   Similarly, from a style standpoint, growth stocks beat small stocks both in the large cap and small cap stocks across the capitalization spectrum.

There were several reasons for the perceived optimism across US stocks.  For one, there appears to be a thawing in the trade war between the US and China, potentially removing some of the uncertainty that has existed.

In addition, the yield curve moved back to its normal positive slope, reversing the inversion that appeared earlier in the year.   As we have noted many times, there is a correlation between inverted yield curves and recessions (remember, correlation is not the same as causation).  Similarly, as noted earlier, the Fed has hit the pause button on any rate changes, and rates remain accommodative.  This provides investors a positive signal, triggering more of a ‘risk-on’ approach than if a recession was impending. 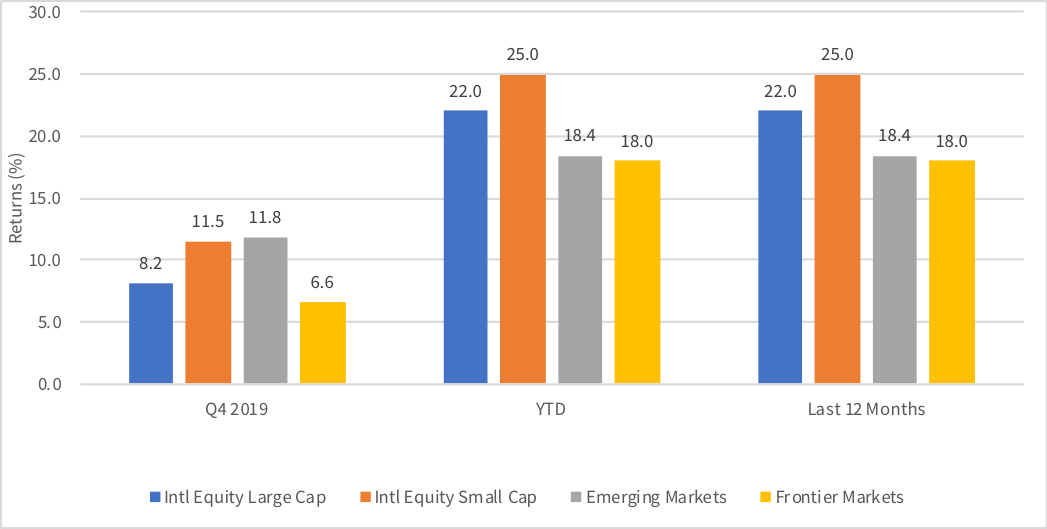 Source: Morningstar, MSCI benchmarks shown, past performance is not indicative of future results

International stocks held their own during the 4th quarter with even international small cap and emerging market stocks, recovering from the third quarter, outpacing their high-flying US counterparts.  It is important to keep in mind that while international stocks broadly underperformed US stocks for the year, the returns they generated are still pretty strong.  Said differently, it was less about non-US stocks doing poorly and more about US stocks performing spectacularly.

There are several factors underlying the positive international equity returns for the quarter.  For one, there is hope the more recent positive trade developments between the US and China will lead to less uncertainty and more business spending.    Specifically, the Global Purchasing Managers’ Index increased from Q3 to Q4 in non-US developed markets broadly including the Euro Area and Germany; though we are not out of the woods as they all decreased from November to December).

In addition, like the US, other global central banks remain accommodative with their policies. With low yields on cash and bonds, stocks become more attractive.

Let’s not forget about the UK.  In a landslide election in December, Boris Johnson not only retained his position as Prime Minister but may now actually be able to carry out the mandate to leave the EU, which was originally voted on in 2016.  A smooth transition could be a positive for global equities with this major uncertainty removed from the equation, though this is clearly not a given.

Overall, international equities remain undervalued, even if just slightly, relative to both historical norms and current US valuations.  We continue to recommend an allocation to non-US equities.  Investors should also keep in mind the return of international equities can be driven by the dollar relative for foreign currencies (the Wall Street Journal Dollar Index ended the quarter lower).

Global REITs, as represented by the Dow Jones Global Select REIT, saw a reversal from Q3 when they were one of the highest returning indexes over the quarter, to being one of the lowest returning asset classes in Q4, eking out a 0.5% return.  There was quite a divergence this quarter with non-US REITs gaining 3.9% while their US counterparts fell by 1.2%.  Like global equities, global REITs had a strong year, jumping almost 23%.  As we have mentioned before, some of this gain is likely due to the higher yields available in REITs, making them more attractive relative to other lower-yielding investments. 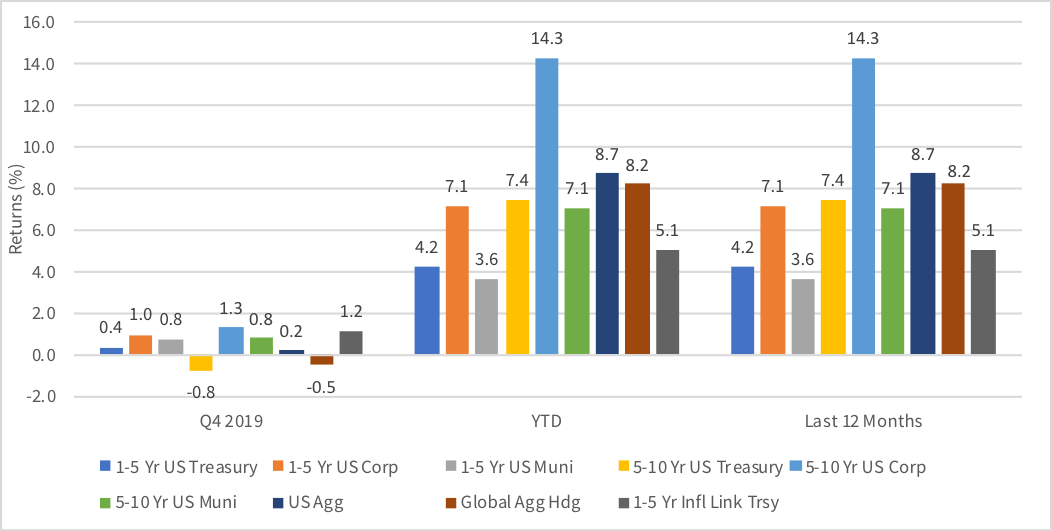 Fixed income markets saw mixed results during Q4 2019.  In particular, the Treasury market saw yields decrease on the shorter end of the curve (2 years and shorter) while yields increased for 3-year Treasury bonds and longer. In fact, as the chart shows, 3-month Treasury bills consistently declined throughout 2019 while 10-year Treasury bonds reversed their consistent decline during the fourth quarter. Remember, prices move inversely with yields. 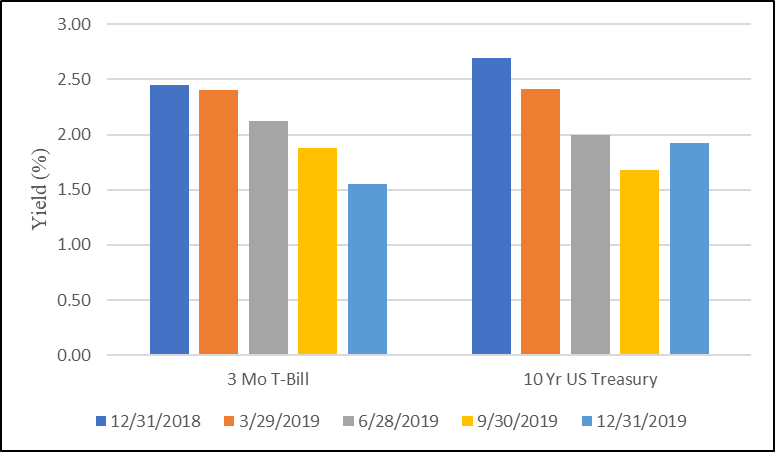 The short story on the likely main reason for the decrease in shorter term Treasury yields lies with the Fed’s decision to lower rates in October.  As it relates to the increase in longer term bond yields, their upward march in Q4  was likely due to moving from a risk-off environment to a risk-on one as trade talks between the US and China continue to progress.

On a positive note, with shorter term Treasuries decreasing with longer ones increasing, the Treasury curve by and large had a normal, upward sloping shape.  As the chart below shows, there is a positive difference between 10-year and both 3- month and 2-year Treasuries.  With the yield curve no longer inverted, calls for an imminent recession have decreased. 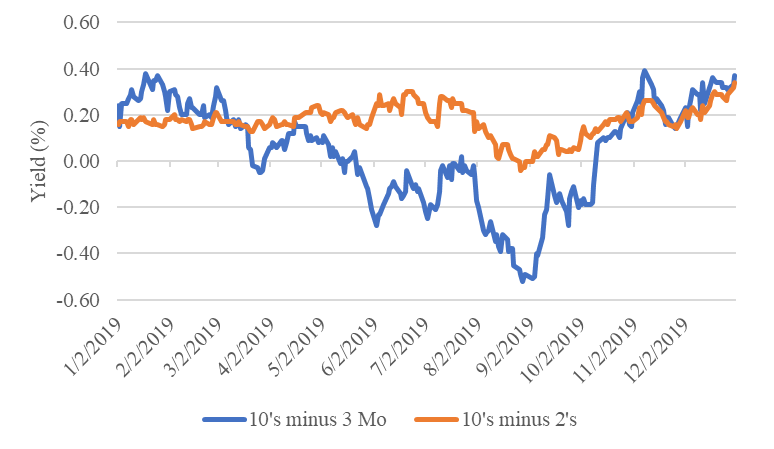 Non-US fixed income returns (hedged to the USD) fell during the fourth quarter.  Ironically, returns fell though one could argue the situation in non-US markets is actually stabilizing as the amount of negative yielding debt has dropped to around $11T, from a high around $17T earlier in the summer (source: JPMorgan).    As we noted previously in this commentary, Sweden’s central bank became the first to end its experiment with negative rates, moving its policy rate back to zero.

The following chart shows 10-year government bond yields across several major countries, as of January 6, 2020 (source: tradingeconomics.com).  While yields are still negative in Japan and Germany, it is important to note they are less negative than they were three months ago.  In addition, the US is still the best game in town as rates here are still higher than other developed nations, though this doesn’t mean you should entirely eschew an allocation to non-US fixed income. 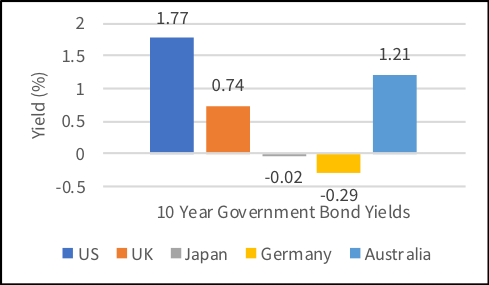 Our portfolio’s focus will continue to be on high quality bonds with an emphasis on short to intermediate duration government and corporate bonds, where default risk is relatively low.  For some investors, muni bonds are attractive for their tax-free income.

Questions or comments? Don't hesitate to reach out - we'd love to hear from you.

More From Our Site

The Market Has No Memory
The SECURE Act Has Passed. What Does it Mean for Your Retirement?
Concept One: Leverage Diversification to Reduce Risk

This document contains general information, may be based on authorities that are subject to change, and is not a substitute for professional advice or services.  This document does not constitute tax, consulting, business, financial, investment, legal or other professional advice, and you should consult a qualified professional advisor before taking any action based on the information herein.  This document is intended for the exclusive use of clients or prospective clients of CogentBlue Wealth Advisors, LLC.  Content is privileged and confidential.  Information has been obtained by a variety of sources believed to be reliable though not independently verified.  Any forecasts represent media expectations; actual returns, volatilities and correlations will differ from forecasts.       Historical and forecasted information does not include advisory fees, transaction fees, custody fees, taxes or any other expenses associated with investable products.       Actual expenses will detract from performance.  Past performance does not indicate future performance.

The sole purpose of this document is to inform, and it is not intended to be an offer or solicitation to purchase or sell any security, or investment or service.  Investments mentioned in this document may not be suitable for investors. Before making any investment, each investor should carefully consider the risks associated with the investment and make a determination based on the investor’s own particular circumstances, that the investment is consistent with the investor’s investment objectives.  Information in this document was prepared by CogentBlue Wealth Advisors, LLC and although information in this document has been obtained from sources believed to be reliable, CogentBlue Wealth Advisors, LLC does not guarantee its accuracy, completeness or reliability and are not responsible or liable for any direct, indirect or consequential losses from its use.  Any such information may be incomplete or condensed and is subject to change without notice.